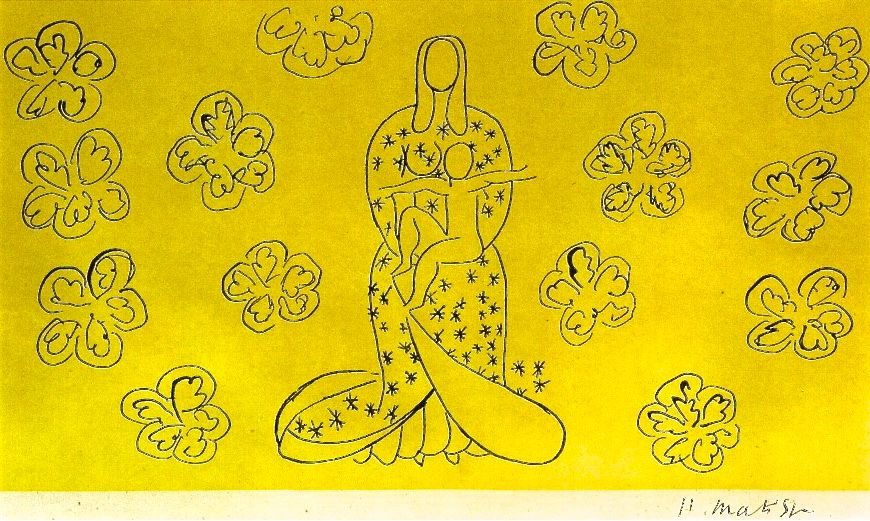 Together with Pablo Picasso, he is one of the most important artists of classical modernism. Along with André Derain, he is considered a pioneer and main representative of Fauvism, which propagated the detachment from Impressionism and represented the first artistic movement of the 20th century. Matisse's work is carried by a planar coloration and tension-filled lines.

In his paintings, the colouring, the playful composition and the lightness of his pictorial themes are the result of long studies.

With his silhouettes (gouaches découpées) created in the 1940s - one example is the artist's book Jazz - Matisse, who was seriously ill, created a late work that brought his reductionist tendencies to a conclusion and, with its colourfulness and ornamentation, is regarded as the high point of his artistic career. The Chapel of the Rosary in Vence, planned and furnished by him and inaugurated in 1951, was considered by the artist to be his masterpiece.

His stylistic innovations influenced modern art. Thus, the Abstract Expressionists in the USA repeatedly referred to his work.

Matisse was the only contemporary artist whom Picasso regarded as an equal. No other contemporary artist had meant as much to him as Matisse, despite their conflicting artistic orientation. There was a lively exchange during their meetings. "We have to talk to each other as much as we can," Matisse said to Picasso in the late 1940s, adding, "If one of us dies, there will be some things that the other can't talk to anyone else about."

Picasso, who also sometimes launched cruel insults, never allowed anyone else to criticize Matisse. There is much evidence of this, and one of the best of the many testimonies is from Christian Zervos. Matisse and Picasso spent an afternoon in the Coupole with several others. Matisse left the circle for a moment. When someone asked where he had gone, Picasso replied that he was sitting safely on his laurel wreath. Most of those present began to attack Matisse because they were seeking Picasso's approval. Picasso got angry at this and yelled, "I will not tolerate you saying anything against Matisse, he's our greatest painter."

That's how they appreciated each other. Picasso said: "Basically there's nothing but Matisse." "Only Picasso can allow himself everything. He can confuse everything. Disfigure, mutilate, dismember. He's always, he always stays right," said Matisse. "That's why Matisse is Matisse: because he has the sun in his body," said Picasso.