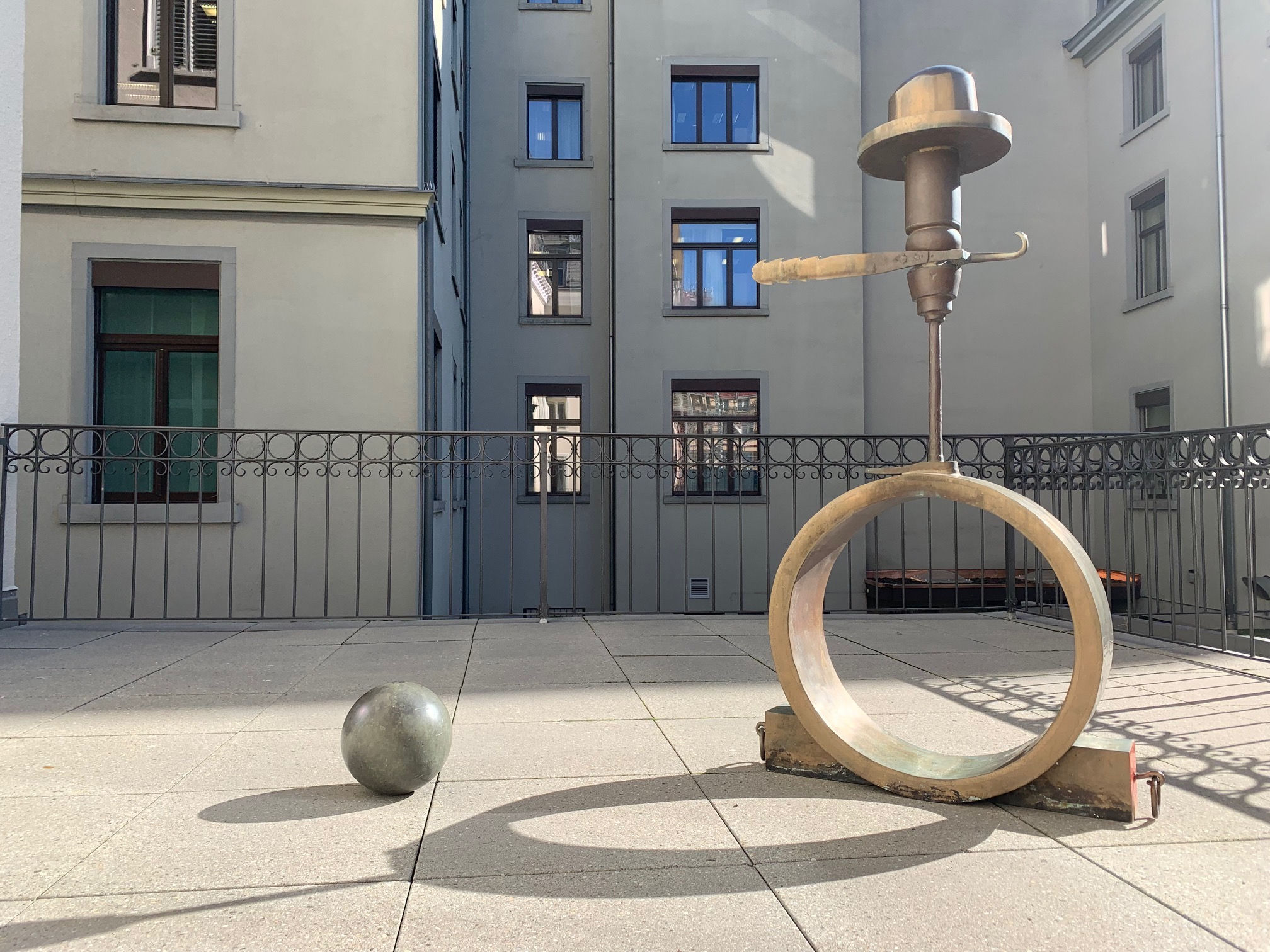 Daniel Spoerri is a Swiss visual artist, dancer and director of Romanian origin. He is one of the most important representatives of object art, co-founder of the artist group Nouveau Réalisme and is considered the inventor of Eat-Art.

Spoerri studied classical dance and pantomime in Zurich and later in Paris from 1949 to 1954. For some time he was a student of Étienne Decroux. After his return he was engaged as a solo dancer at the Stadttheater Bern, where he staged avant-garde pieces by Eugène Ionesco, Pablo Picasso and Jean Tardieu. During this time Spoerri was already trying his hand at directing short films. In 1957 he worked as assistant director to Gustav Rudolf Sellner at the Landestheater Darmstadt. In Darmstadt a circle of concrete poets formed around Spoerri, Emmett Williams and Claus Bremer.

In 1959 Spoerri moved to Paris, where he soon made the acquaintance of Jean Tinguely, Arman, François Dufrêne and Yves Klein and founded Edition MAT, which published the first multiples. It was in Paris that Spoerri created his first object art and above all his Tableaux pièges (pictures or objects in which a piece of reality is trapped as in a trap). On 27 October 1960 the group Nouveau Réalisme - headed by Pierre Restany - was founded with Spoerri's participation. Other founding members were Jean Tinguely, Arman, François Dufrêne, Raymond Hains, Yves Klein, Jacques de la Villeglé and Martial Raysse. In 1961 Spoerri was represented in the exhibition The Art of Assemblage at the New York Museum of Modern Art. His work Kichka's Breakfast I was subsequently purchased by MoMA. In 1962 he was one of six participants in the exhibition Dylaby in Amsterdam.

In 1963, Spoerri founded the Dorotheanum - non-profit institute for self-disembodiment at the Dorothea Loehr Gallery in Frankfurt am Main and in the same year participated in the FESTUM FLUXORUM FLUXUS at the Staatliche Kunstakademie Düsseldorf. In 1967/68 Spoerri spent a whole year on the Greek island of Symi. In that year he created 25 objects under the title Gastronomisches Tagebuch - 25 objets de magie à la noix.

In 1968 Spoerri founded the Eat-Art Edition and, together with the innkeeper Carlo Schröter (* 1935), opened the Restaurant of the Seven Senses at Burgplatz 19 (corner of Mühlenstraße) in Düsseldorf, which he ran until 1972 and in which, among others, events with Joseph Beuys, Robert Filliou, Dieter Roth, Ben Vautier and Emmett Williams took place. On the ground floor there was the beer and bar and on the first floor was the restaurant. The palindrome signs of André Thomkins hung on the outside facade. In 1970 he opened the EAT-ART-Gallery, together with Hete Hünermann and Carlo Schröter, in which he organized EAT-ART banquets, such as Ultima Cema or Banchetto funebre del Nuovo Realismo. At regular intervals, Spoerri initiated various editions and happenings with the participation of contemporary artists, whose relics were also distributed through the gallery.

In 1978 he was appointed professor for three-dimensional design at the Cologne Werkschulen and taught there until 1982, in between he founded the Musée Sentimental in Cologne. In 1983 he accepted a call to the Academy of Fine Arts in Munich, where he taught until 1989, during which time he also published several cookery books, which, however, actually contained more art than cooking.

Since June 2015, the Dead End sculpture group, a bronze casting of mannequins depicting dead people, victims of crimes against humanity, has been located in the courtyard of the Museum of Lower Austria.

In November 2015 and January 2016, opera director Bruno Berger-Gorski used the sculpture Carrelino by Daniel Spoerri as a dramaturgical link between two Israeli chamber operas in Bonn and Luxembourg. These were staged on the occasion of the German-Israeli Year 2015 and in commemoration of the November pogroms.

Spoerri has lived in Vienna since the beginning of 2007. He has been divorced three times, among others from the German photographer Vera Mercer.