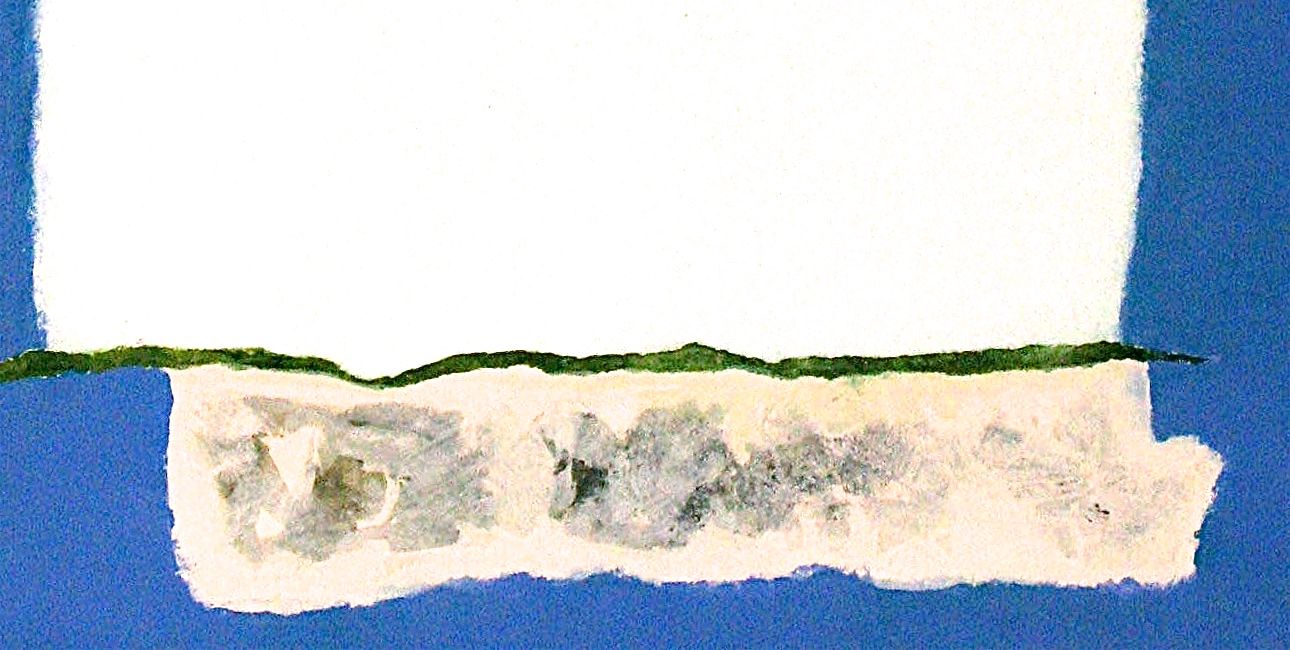 Theodoros Stamos was an American painter of Greek origin. His belongs to the to Abstract Expressionism movement.

In 1936 he enrolled at the Peter Stuyvesant High School, a technical college, and began studying art. He was inspired by a sculpture by Jacob Epstein, which was published in a newspaper, so that he drew on it and, together with Simon Kennedy and Joseph Konzal, turned to sculpture. He received a scholarship from the American Artist's School. The following year he met Joseph Solman, a member of the artists' group "The Ten", who introduced him to painting again by showing him works by Milton Avery, Arthur Dove and Marsden Hartley. Three months before graduating, Stamos left Stuyvesant High School. He had realized that sculptural work required more effort, financially and spatially alone he could not cope with it. Subsequently, he was a guest in various studios around 10th Street. It was there that the first serious pictures of the autodidact were created. They show simple but figurative Greek and American landscapes. In 1941 he finally opened a small framing shop in Manhattan, which brought him into contact with other artists such as Arshile Gorky and Fernand Léger. His most lucrative framing commission came from the Galerie Nierendorf, for which he produced numerous Paul Klee pictures. The Wakefield Gallery, run by Betty Parsons, exhibited his works for the first time in 1943, paving the way for him to become an important point of contact for Abstract Expressionism. In that year Stamos met Adolph Gottlieb and Barnett Newman, who were to become important for him. The paintings from this phase are Movement of Plants, Seedling, Composition with Braided Ropes and Ancestral Flows. They contain elements of surrealism as in Max Ernst, Joan Miró or Paul Klee, who is well known for his framing work. Adolph Gottlieb also left deep impressions, which can be recognized in the biomorphic forms. Movement of Plants was shown in the 1945 annual exhibition at the Whitney Museum and found a buyer who, in the course of his collecting passion, collected 32 Stamos paintings, which are now in the Munson-Williams-Proctor Institute in Utica, New York. The first painting acquired by a museum is called Sounds in the Rock, and has been hanging in the New York Museum of Modern Art since 1946. His encounters with Mark Rothko, Kurt Seligmann, and Peggy Guggenheim took place in 1947. On his travels through the United States, he met Mark Tobey, with whom he exchanged paintings. A friendship arose with John Graham. Together with the poet Robert Price he travelled through France, Italy and Greece. Through Christian Zervos he met Constantin Brâncuși, Victor Brauner, Alberto Giacometti, Henri Laurens and Pablo Picasso. He met his fellow countryman Morris Graves, who also loved to travel, in Chartres. Graves had a penchant for Far Eastern culture, which Stamos took over somewhat later. But first he began to collect Art Nouveau objects and furniture. He closed his frame shop in 1948, because on the recommendation of the minimalist sculptor Tony Smith, Stamos began teaching at Heartley Settlement House in 1949. He taught there for four years. He also taught art at the famous progressive Black Mountain College in North Carolina, where among his students was the painter Kenneth Noland, who emulated his style. Here he also met the leading art critic of Abstract Expressionism, Clement Greenberg. Around 1950 Stamos began painting his Tea House series, in which he incorporated East Asian elements. At this time, he joined the artists' group "The Irascibles", was by far their youngest member and was very interested in the art of his colleagues who were inclined towards Surrealism. In 1951 he turned to color field painting. He received a scholarship from the Louis Comfort Tiffany Foundation. On Long Island he had a house built according to the plans of Tony Smith.

In the mid-1950s, he accepted various teaching positions, for example at the Chicago Art Institute and the Art Student's League in New York. The year 1954 was marked by his lecture at the Phillips Collection in Washington, D.C., on the subject of "Why Nature in Art?", which became famous in the professional world, and the death of his close friend, the poet Robert Price, for whose new edition he produced illustrations in 1956. In the same year he was awarded one of the prizes of the National Institute of Arts and Letters and in 1961 at the 6th Tokyo Internationale the Mainchini Newspaper Prize.

In 1962 Stamos started his series called Sun-Boxes. The first painting of the series is Very Low Sun-Box, painted with acrylic and oil paint on canvas. The first painting of the Transparent Sun-Boxes series followed in 1967 and the Cheops Sun-Boxes series in 1969. In 1966 he gave a guest lecture at Columbia University, School of Fine Arts in New York and the following year he was granted the right of residence as the third artist at Brandeis University in Massachusetts as "Artist-in-Residence". He was also awarded the National Arts Foundation Award. His contact with Mark Rothko of the Irascibles became more intense during this time and neither of them had any idea that four years later it would have fatal consequences. In 1969 Stamos completed a huge work for the entrance hall of an office building in Manhattan. He soon began a new series of paintings, which he called the Infinity Field Series (sometimes with the addition of a locality, for example, Infinity Field Jerusalem Series), which extended the previous rectangular representation from the "box" depicted to the edge of the canvas.

After Rothko's suicide, Stamos, who had been designated by Rothko as one of three executors of the estate, became entangled in the dubious machinations of another executor. The two Rothko children (20 and 7 years old) went to court in 1971 for selling off their father's works. Stamos lost his house and his reputation through the trial. Before the trial he had been in Greece for the second time, but now he bought a house on Lefkada, where he found new inspiration while walking on the sea. In 1977, he gave up his last remaining teaching position to travel to inspire his creativity. In 1983 he felt slandered by a BBC documentary on the Rothko case, but his lawsuit was futile and he withdrew it. At the same time, a small group, mainly Europeans, came together under the name "The Circle of Friends of Theodoros Stamos" to try to get their favourite artist out of the shadows. In 1994 Stamos was elected a member ("NA") of the National Academy of Design. After suffering from a chronic lung disease, Theodoros Stamos died on February 2, 1997, in a hospital in the western Greek city of Ioannina.