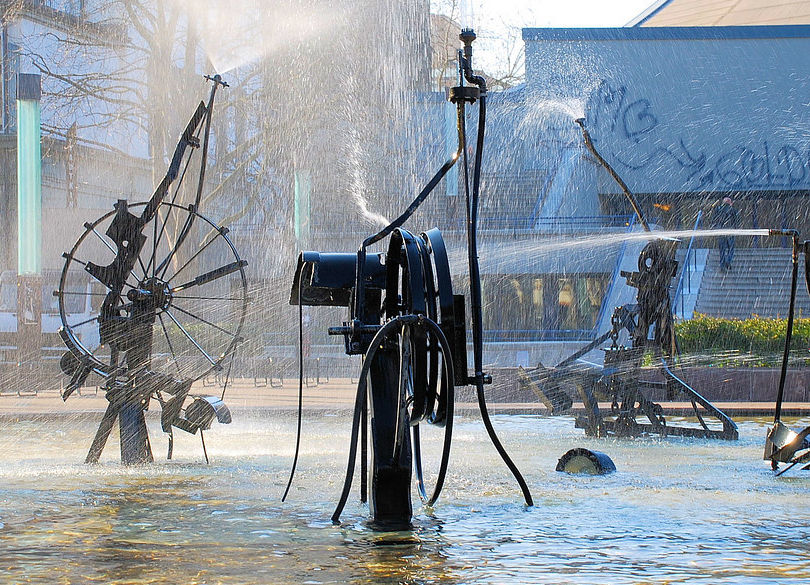 Jean Tinguely was a Swiss painter and sculptor of Nouveau Réalisme. He is regarded as one of the main representatives of kinetic art. Tinguely became known above all for his movable, machine-like sculptures.

Tinguely grew up in Basel, initially working as a decorator and attending courses at the Allgemeine Gewerbeschule. During this time he met Daniel Spoerri, with whom he worked on a theatre project.

In 1951 Tinguely married Eva Aeppli, with whom he moved to Paris. Shortly after Tinguely moved to the Impasse Ronsin, near Constantin Brâncușis studio, in 1955, he met Yves Klein and Niki de Saint Phalle and they married in 1971 in a second marriage.

He had a long-standing friendship with the iron sculptor Bernhard Luginbühl. Together with other artists and Niki de Saint Phalle he realized various joint projects.

In 1960 he became a member of the Nouveaux Réalistes artists' association, founded from Pierre Restany. In the same year he began to use "found objects" in his works.

A gigantic machine in the garden of the Museum of Modern Art, New York, which was made of scrap metal and was capable of destroying itself, caused a sensation. in 1960.

In the following years he developed - often in collaboration with artist colleagues - large, mobile machines. In 1977 Tinguely began designing fountains; running, splashing and in winter freezing water became an increasingly important part of his work.

Together with Niki de Saint Phalle he took part in the 1962 exhibition Dylaby in Amsterdam and was represented as an artist at documenta III in Kassel, the 4th documenta im and documenta 6. He enjoyed an international reputation and was awarded the Wilhelm Lehmbruck Prize of the City of Duisburg in 1976 and the Art Prize of the City of Basel in 1980. In 1990 a Tinguely exhibition took place in Moscow at the Tretyakov Gallery.

In the last year of his life Tinguely created the large hanging sculpture La Cascade in the USA. Jean Tinguely died in 1991 at the age of just 66.

In Tinguely's hometown of Basel, the majority of his works have been exhibited since 1996 in the Museum Tinguely named after him.